close
What is Acupuncture?
Acupuncture is the gentle insertion of very fine needles specific points on the body. This process stimulates movement of energy within the body, allowing natural healing to take place. These points are selected based on years of training acupuncturists receive, which is based on over 3,000 years of experience in China. 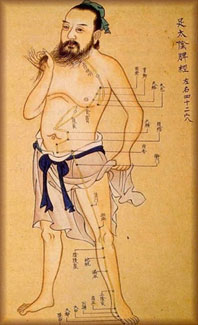 Acupuncture helps to prevent illness by improving the overall functioning the body’s immune and organ systems. Acupuncture is helpful for:
Acupuncture originated in China over 3,000 years ago. It is part of the holistic system of healing known as Traditional Chinese Medicine (“TCM”).
How does Acupuncture work?
Traditional Chinese Medicine Theory
The Classical Chinese explanation is that energy (Qi) flows in channels (meridians) throughout the body and over its surfaces. These channels are rivers of energy, which are referred to as meridians. The Chinese have identified 71 meridians in the human body, which is a basic energy map for all people. The meridians are often compared to a series of interconnected highways. Each of the major organs in the body is associated with its own meridian. Through the network of meridians the internal organs are connected to certain areas and parts of the body including the muscles, bones, joints, and also other organs.
The Chinese believe that health is a manifestation of balance, both within the body itself and between the body and the external environment. When the body is internally balanced and in harmony with the external environment, Qi flows smoothly through the meridians to nourish the organs and tissues. If an obstruction occurs in one of the meridians, the Qi is disrupted and cannot flow properly. When the Qi cannot flow smoothly or is forced to flow in the opposite direction, the body’s innate balance is disrupted and illness results.
Acupuncture points are the specific points on the meridians where the Qi is both concentrated and accessible. Acupuncture engages the Qi by inserting needles at these specific points, the goal being to restore the proper flow of Qi. As the body regains its natural balance, well-being returns. 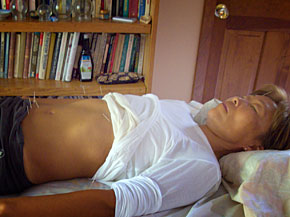 Acupuncture and Modern Science
To the human body, acupuncture needles are a physical stimulus. In Western science, a stimulus is defined as a detectable change in either the external environment or within the body itself. When the body detects change, it produces a response. Although acupuncture is not yet fully understood by Western science, with modern technology scientists can now actually begin to “see” the body’s response to acupuncture. For example, using an MRI (a very sophisticated x-ray), researchers have shown that when a needle is inserted at specific acupuncture points on the body, corresponding changes occur in the brain.
In the West, acupuncture is most well-known for its ability to relieve pain so the majority of research thus far has been done in this area. Acupuncture points are now believed to stimulate the central nervous system (the brain and spinal cord) to release pain-relieving chemicals into the muscles, spinal cord and brain. Acupuncture may also stimulate other chemicals to be released by the brain, including hormones that influence the self-regulating system of the body.
Summary
Chinese Oriental medicine has been around for thousands of years, and has provided us with a unique and holistic approach to help prevent and treat disease. Western science and Traditional Chinese Medicine ultimately rely on the body’s natural healing ability to maintain health and protect against disease. Both have the same goal of helping a person stay healthy. Western science tends to use drugs and surgery as needed. Acupuncturists tend to use gentle needling and herbs. A combination of both systems creates an ideal environment of health and healing.